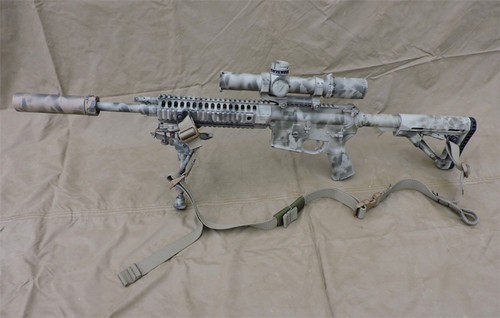 ENHANCED SS Loophole Rifle Sling
Enhanced model has an added adjustment tail at the front of the sling for easier adjustment during patrol carry. A sling catered for short barreled, precision gas-guns and primary weapon systems. A two-point rifle sling designed for unconventional firing positions to maximize shooter stability. Specifically tailored for individuals who shoot off of tripods and barricades. Features: Sewn in loophole at rear of sling. Allows shooter to rapidly connect/disconnect sling to their belt for supported positions in the sitting, kneeling, standing, or during helo operations. (A carabineer is typically used to connect the sling to the belt.) One handed adjustable sling length. Smoothly transition from different positions, or sling rifle across body and tighten sling, reducing profile to negotiate obstacles or tend to the wounded. Duraflex QD buckle allows shooter to quickly detach themselves from the sling/rifle in an emergency. 1.25” OD/Green webbing No metal hardware used- reduces noise and doesn’t chew up your rifle stock Lightweight – weighs just 5.5oz, a fraction of what traditional precision rifle slings weigh Lifetime Warranty/Made in the USA. This day and age, the trend is for rifles to be made as light as possible. There is a contradicting trend for rifle slings to become bigger & heavier. Some "precision rifle" slings are weighing in over a pound, with bulky metal hardware and thick webbing. They are marketed to have huge load ratings up to several thousand pounds. But keep in mind that the sling hardware/mounting points are only rated for several hundred pounds. Don't be "that guy" and spend hundreds or even thousands of dollars on a light weight rifle, just to turn around and pay $100+ to add that 1.5 pounds back to your rifle with a bulky sling. Keep it simple and shoot straight.