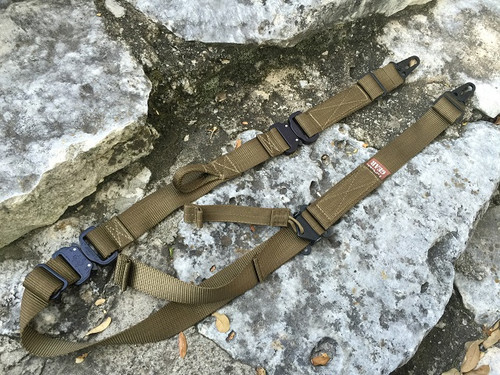 TAB Gear Pinnacle Rifle Sling
TAB GEAR Pinnacle Rifle Sling The Pinnacle Rifle Sling, PRS for short, is our latest product in our line of precision rifle slings. The PRS sling is a drastic departure from the precision rifle slings that we have all used for many years. The PRS sling has no arm loop to allow a traditional “slung up” position by putting your arm through a loop. We feel like the PRS sling is the best sling on the market for the military, law enforcement, or match shooter who wants to be able to use a sling as a marksmanship aid in practically every shooting position he may find himself in. FEATURES: Like all of our slings the rear swivel can be sewn into the webbing for a very tight connection to the rifle. On all of our slings, the PRS sling included, the webbing at the back that has the swivel sewn in we call the “tail”. There has been a significant improvement over the other tails that we have used on all of our slings before this. We have had a few customers who wanted the tail to be stiffer than in our other slings. On the PRS we have installed some material into the tail that dramatically stiffens the tail, this helps in supporting the rifle when a rear bag is not available or feasible. Also, like every sling we have ever made there is the option on the PRS to have the rear swivel not be sewn into the tail. This feature allows the shooter to quickly switch out swivels both front and rear should you need to go from one rifle to another rifle that has different sling attachment points. The PRS also has two buckles like all of our slings. There are some slings on the market that have one buckle and it is usually in the middle of the sling. A very popular method of carrying the precision rifle is in a Patrol Carry position with the rifle carried muzzle down in the front. With a sling with one buckle this positions the buckle in the middle of the back and impossible to reach, so the vast majority of the time the single buckle is a complete waste. This buckle is accessible when the rifle is carried muzzle up on the back. With two buckles when the rifle is carried in the Patrol Carry position the buckle that is at the tail is easy to reach because it is positioned near the shoulder to allow the shooter to quickly unbuckle the rifle from the body should the need arise. If you purchase the PRS with Fastex Buckles they are not sewn into the webbing. They are attached with metal 1-1/2” metal sliders to allow them to be replaced if need be. If you purchase the PRS with the AutriAlpin Cobra buckles they will be sewn in because we are confident that the Aluminum buckle will not become damaged and need to be replaced. We also make the PRS sling with no buckles at all if that is what the shooter desires. Simple version has no release buckls. Regular version has industry standard side release plastic buckles. Elite version has metal Cobra buckles. The Marine Corps has practiced shooting from a tripod for many years with the sling attached to a carabiner on the belt and recently more people have begun using and practicing shooting using this method. On the PRS we have constructed a heavy duty loop out of the webbing that is in between the buckles. The loop is sewn in a way that prevents it from collapsing so it will stay open to allow the shooter to quickly unbuckle the sling from the tail at the back of the sling and clip the loop into a carabiner on the belt. There is enough adjustment range when clipped into a carabiner that this allows the shooter to shoot from a tripod or transition to many different shooting positions by loosening or tightening the sling as needed. The 1-1/2” webbing on the adjustment section of the sling does not have the buckle sewn in in either the Fastex nor the Cobra buckle version. This to allow the user to simply cut off and re-melt the webbing should it be determined that that much adjustment range is not needed. The release on the quick adjust cam buckle has been changed on the PRS sling by having two layers of 1” webbing sewn together to make the release stiffer. It has also been lengthened and the webbing is folded and bar tacked at the end to create a large “knot” for an easier and more secure grip when releasing tension on the sling. We have also installed another triple section of webbing with stiffening material added, like at the tail, that is sewn to the front portion of the quick adjust cam buckle. Anyone who has ever had to shoot from a Hawkins position, which is prone with no bipod touching the ground, and the rifle resting on the clenched fist, has found out that the clenched fist is almost high enough to be comfortable but not quite. The hard point that we have installed directly to the front of the quick adjust buckle acts as a mono pod to support the rifle in a Hawkins position, it will support the full weight of a twenty pound rifle. MATERIALS: The same 1-1/2” webbing we have been using in all of our slings since we began making them. Mil Spec 17337 1” webbing used on the release tab. Choice of ITW Fastex buckles or the amazing AustriAlpin Cobra buckles. Metal 1-1/2” quick adjust buckle to allow quick tightening or loosening of the sling. Available with made Flush Cup Swivels, Heavy Duty Stud Swivels, HK Hooks, or no swivels at all.