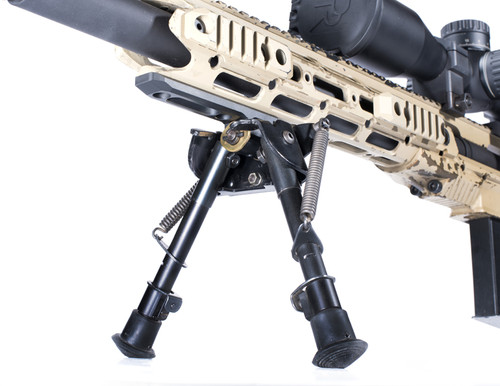 Badger LPMH Kit with Bipod. The LPHM(Low Profile Harris Mount) first started as a concept that an employee developed while working as an instructor at the Marine Corps 1st Special Operations Training Group, Special Tactics Branch. The Instructor, having broken several Harris mounting brackets himself and seeing countless students break the brackets on their Sniper rifles, wanted to build a better mousetrap that was not only more robust but could also be retrofit to existing Harris BRM-S bipods that were already commercially available and in supply systems. We started tinkering around at the shop and made a rough prototype that direct mounted to his AR10 handguard. When we started running it off of barricades we noticed the advantages immediately. It was much more low-profile, it didn’t have a thumbscrew that comes loose, and ultimately it was a much more robust attachment system. At the time we identified the need to have Harris leg extension buttons relocated to the inside of the legs to avoid accidental extension when bracing against or pulling back on barricades. We contacted Harris and worked out a line of 6-9” BRM-S bipods with our modified button design. We decided to make a kit with our Harris Bipod and mount, either in Picatinny, MLOK, or Remington Racs, as well as just the mount for retrofitting your existing BRM-S. In the short term we’ve got a female plate for our Remington Racs version coming. With this plate you’ll be able to inlet your stock to accept the female backing plate so that you can get the same advantages of the mount on a classic style stock without having to rely on a small sling swivel stud. Badger will also have other offerings for bipod solutions releasing incrementally throughout the year. Weights for mounts Pic. – 1 oz. mount, 10.4 oz. as kit RACS – 1.6 oz. mount, 11.6 oz. as kit MLOK 1.9 oz, 12.2 oz. as kit

Harris Bi-pods with Swivel Base