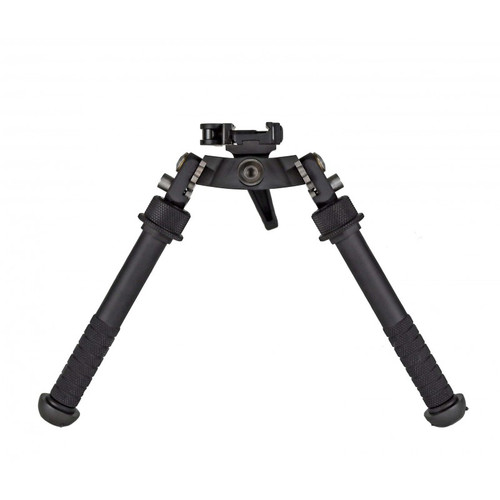 CAL ATLAS Bipod
BT65 Gen. 2 CAL Atlas Bipod The CAL (Cant And Loc) Atlas Bipods were developed for shooters that do not desire the Panning feature. The BT65 mounts directly to any 1913 style Picatinny rail via a low profile two screw clamp assembly. It is comprised of 6061-T6 aluminum that is Mil-Spec Type III hard coat anodized and have heat treated stainless steel components. We chose to support a legend in the shooting sports by using the original KMW “Pod-Loc™.” With the CAL bipod mounted to your rifle, you will be able to lock and un-lock the canting motion by rotating the Pod-Loc™ lever. Turn clockwise to lock and counter clockwise to un-lock. The Pod-Loc™ lever position can be adjusted for positioning by pulling the lever directly away from the body of the CAL and rotating to desired position. This positioning can be repeated until optimal position is achieved. Available in black only. Height Range: 4.75 – 9.0" approximately Cant: 15 degrees +/- 5 leg positions: 0, 45, 90, 135 and 180 degrees Non-Rotating Legs: outer leg does not rotate around inner leg Larger, stronger inner legs Weight: 12.94 ounces Footprint: 9.75 – 13" Designed, Engineered, Machined & Assembled in America.